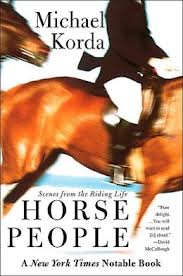 I just finished Michael Korda’s Horse People, and I highly recommend it!

Interestingly, I bought this book back in 2007, got a few pages in, declared it boring, and placed it back on my shelf. I’m not sure why I dropped it without giving it a fair shake, but I picked it back up about two months ago and am so glad I did. Quite frankly, it was excellent. As a horse owner, and especially as a farm owner, there was so much to which I could relate; also, his writing, at times, is rather poetic.

This scene is beautiful:

“From afar you could occasionally hear the muted noise of traffic on the highway, or a ship’s horn as it passed under the Verrazano Narrows Bridge; otherwise, the only sound was of the horses’ hooves and their steady breathing – that and the jingling of a curb chain and the snort that is a horse’s way of expressing relaxation, the feeling toward the end of the last ride of the day that all is for the best in the best of all possible worlds, with a good meal on the horizon and a long night of dozing and munching on hay in the company of a couple dozen other horses.”

The line below is so funny – and would be me if I had children:

“Though Jane had scarcely bothered to introduce her children or name them, I was given the name, the breeding, the current state of health, and the age of each of her horses.”

“People who want their horse or horses at home will go to any lengths to get them there and keep them there, and not just in the northeastern United States. When people think of the West, they think of sweeping vistas, big skies, space – but anybody who has actually lived out West knows that you can find backyard horses on pieces of property that hardly seem large enough to contain a trailer mounted on cinder blocks and the owner’s rusted-out old car, let alone a corral for Old Paint, yet there Old Paint stands, right behind the trailer, big as life, eating two squares a day while the family lives off food stamps.”

How true is this? While I wouldn’t put my horses just anywhere, I was willing to do almost anything to get them in my backyard. James and I went without for years so we could save and save for our farm. Heck – I still go without. I have a hard time spending money on clothes and other frivolities – sometimes I just can’t justify the extra money when I spend so much on the horses. I see everything in hay bales, bags of grain, and riding lessons. That $50 dinner is 10 bales of hay…and so on.

“Once, early in our relationship, I caught sight of a rusty old tin garbage bin and thoughtlessly replaced it with a brand-new one prettily painted in red, white, and blue with Pennsylvania Dutch motifs that I picked up from the local hardware store, only to find that I had created a crisis which required one of Richard’s rare personal interventions…because the old one had been Roxie’s storage bin for her horse feed ever since she was a little girl. In the end it had to be retrieved from the dump, and the new one went unused for the next ten years or so, in shiny reproach.”

Horse people? Sentimental? Never…haha! Doesn’t this sound exactly like something we’d do? I still have, and use, the first dandy brush I bought, with my own money, just prior to getting Takoma when I was 11 years old. I cannot imagine the shape I’d be in if someone tossed it out by accident.

Throughout this book, we follow Michael and his wife, Margaret, a former model, as they move from Manhattan to their farm in Upstate New York. We ride along with them as they acquire new horses, and as Margaret becomes a serious eventer.

There is one thing to keep in mind while reading this, however, and that is that the Kordas are quite wealthy. Even though most of what Michael wrote is pretty relatable, portions of their lives are out of reach. For example, the book spans at least 20 years in which the Kordas have anywhere from two to six horses on their farm – never more than six which Michael makes a point of saying. Yet, they always have part or full-time, live-in barn help. I definitely don’t know what that’s like! And while Margaret may have worked outside the home, Michael (who was the editor-in-chief for Simon & Schuster), never mentioned it. Given this, they still had a barn manager, and sometimes an additional assistant.

Also, their farm grew from 20 to around 200 acres during these 20 years, complete with an indoor arena – must be nice! Having my own indoor on my property would be a dream come true!!

Regardless, I’m not hating on them for their wealth. There were just a few parts when reading where I thought, well, I certainly don’t know what that’s like! But, you know what? Good for them!

Again, I will emphasize that this book was a great read; I enjoyed it thoroughly. I think you, too, will like reading all about the Kordas’ interesting life and experiences and amazing horses, most notably, in my opinion, Missouri, Nebraska, and Hustle.