My Journey to the Bluegrass State 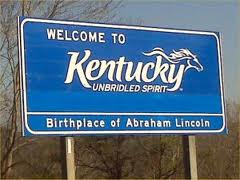 16 Feb My Journey to the Bluegrass State

Last summer James and I celebrated our 5th wedding anniversary (July 4th)! And where does a couple who has promised to stay together until death do they part go to celebrate five years of wedded bliss? Lexington, Kentucky – of course! Well, maybe that’s where a horse crazy girl and her super loving and patient husband go.

Kentucky was just as wonderful as I hoped it would be (minus a slightly rough beginning which I’ll go into later), and even James surprised himself with how much fun he had! Since I have a lot to say about this trip (shocking), I’ll break this section into several entries.

We left on a Monday morning around 9:30. James had wanted to be on the road no later than 8:00or 8:30, but after we dropped Izzie (our German Shepherd) off at my parents, I just had to stop and say goodbye to Misty one last time.

By the time we got onto the beltway, James had just about stopped gritting his teeth (I call him “Bill” when he does that for his dad is a notorious teeth-gritter, especially when we have to wait at a restaurant) and I was happily singing along to Jason Aldean. The drive out to Kentucky was smooth sailing (for the most part). Two jackass kids on motorcycles were flying down 70 and doing wheelies. While part of me wanted to give them a thumbs up because they were kind of bad-ass, the other part of me wanted to go all Kay Yeager (my mother) on them and tell them to slow down, be careful, and think of what their mothers would say if they could see them now! Besides, I told James – one of them is going to wipe out (they were directly in front of us) and then we’re going to hit him and the death of an idiot kid is totally going to ruin my trip! (Because, really, it’s all about me).

We made our way out of Maryland and into West Virginia, an absolutely beautiful state. The mountains are gorgeous and around every bend is another breathtaking show put on by Mother Nature.

Then, like the smarty-pants that he is, James changes our cds until Alabama’s “Mountain Music” blares from the speakers. (I’m just jealous I didn’t think to do it first!). “Oh play me some mountain music, like grandma and grandpa used to play. Then I’ll float on down the river to a Cajun hideaway.”

As soon as we enter into Kentucky, I sit back, relax, and wait for the horses. I have to say that I was a little disappointed; I think I half-expected for horses to be lined up on the side of the highway, waving to me, officially welcoming me into their land of bluegrass, bourbon, and Thoroughbred racing.

Instead, we were headed west into Kentucky for well more than AN HOUR before I saw one horse!!! We passed large fenced in pastures and farms on both sides of the road…and saw nothing but empty fields…or cows. We were about 20 miles outside of Lexington before we finally saw one lone horse out in a field. I was fuming – and they call this the Horse Capital of the World!?

We stayed at the Griffin Gate Marriott in Lexington, a beautiful hotel with a Starbucks and a pool…but without a continental breakfast and free wifi (according to James, major priorities!). Regardless, the hotel was perfect and a big thank you goes out to our friend John who hooked us up with a discount!

Stay tuned for more of my Lexington, Kentucky adventures!