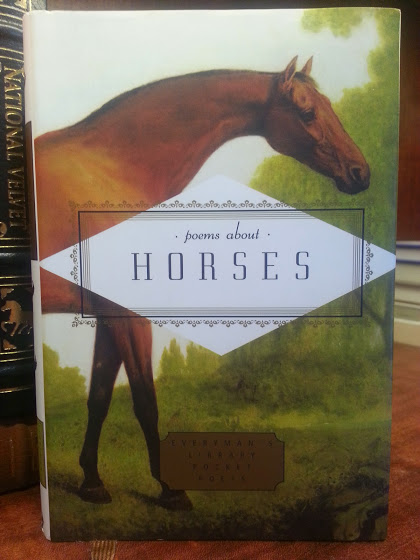 Posted at 15:27h in Literature by lberglie 0 Comments
0 Likes
Share

Not too long ago my mother-in-law gave me a book called, Poems About Horses. It’s one of those Everyman’s Library Pocket Poets; they are available on a variety of topics. This one features a multitude of poets and is broken up into eight categories: Entering the World; Horse and Rider; Horses in Mind; Off the Farm, Off to the Hunt; War Horses; Cowboys and Horses; Equine Encounters; and Celebration and Remembrance. Since I’m a lover of all things literary, I had quite a few favorites. I narrowed that list down for you to peruse through below. 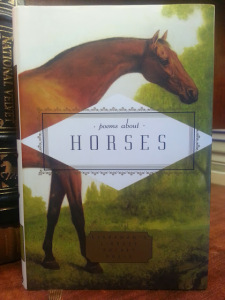 A dozen false starts:
You’re such a fool, I said,
Spooking at shadows when
All day you were calm,
Placidly nosing the bushes
That now you pretend are strange,
Are struck with menace.

But he shuddered, stubborn
In his horsy posture,
Saying that I brought
Devils with me that he
Could hear gathering in all
The places behind him as I
Diverted his coherence
With my chatter and tack.

Indeed I have stolen
Something, a careful attention
I claim for my own yearning
Purpose, while he
Is left alone to guard
Us both from horse eaters
That merely grin at me
But I lust for him, for
The beauty of the haunch
My brush has polished, revealing
Treasures of edible light
In the shift of hide and hooves.

Words are hoops
Through which to leap upon meanings,
Which are horses’ backs,
Bare, moving.

Axes
After whose stroke the wood rings,
And the echoes!
Echoes traveling
Off from the center like horses.

That drops and turns,
A white skull,
Eaten by weedy greens.
Years later I
Encounter them on the road –

Words dry and riderless,
The indefatigable hoof-taps.
While
From the bottom of the pool, fixed stars
Govern a life.

THE HUNTSMEN, ON TOP OF THEIR SWAYING HORSE-TOWERS, by Ted Hughes

The huntsmen, on top of their swaying horse-towers,
Faces raw as butcher’s blocks, are angry.
They have lost their fox.

They have lost most of their hounds.
I can’t help.

Is under my coat.

THE RESCUE, by Robert Creeley

The man sits in a timelessness
with the horse under him in time
to a movement of legs and hooves
upon a timeless sand.

Distance comes in from the foreground
present in the picture as time
he reads outward from
and comes from that beginning.

A wind blows in
and out and all about the man
as the horse ran
and runs to come in time.