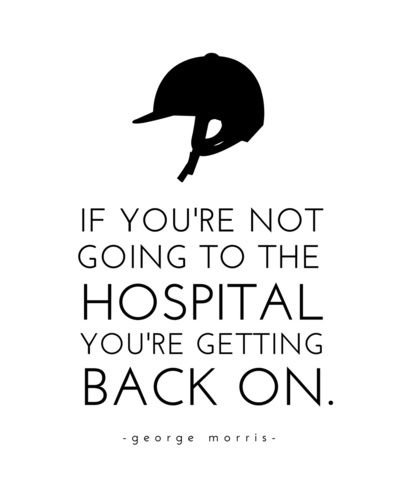 It’s cold and damp today in Maryland, (I’m writing this on Thursday, September the 25th), and whenever the weather’s like this, my left wrist into my thumb area aches. Why, you ask? Because of Misty Mystique, that’s why!

Right before Thanksgiving in 2011, I took a somewhat nasty tumble off of Mis. She had been getting progressively more rotten as the cooler weather set in, so this fall had probably been coming for weeks. It was cool that day, but nice and sunny. I had successfully shown her in her first dressage schooling show a few weeks prior, so I was riding in my dressage saddle that day – a mistake.

When I asked her for her right lead canter, she exploded. She did a massive leap into the air and then displayed some bronco-type antics for three-quarters of the ring until I was finally unseated. I blame Misty for being a jerk, of course, but I also blame my dressage saddle. When I’m in my AP and Mis starts acting up to the point that I know I’m coming off, I usually (at the very last minute because of course I try to stick it out) catapult myself off, half jumping/half falling. When my stirrups are up and I have my leg underneath me, I’m quite nimble and have performed this maneuver more than I’d like to admit. (And *most* of the time, I land on my feet). 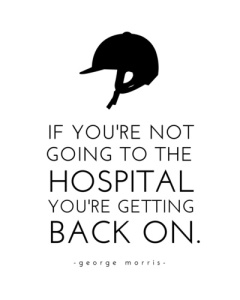 But in the dressage saddle with my legs hanging long – forget it. I just hung on the best I could and prayed Mis would cut it out, but she didn’t. I came off on the right side, mid-leap, (Misty doesn’t buck or rear – she leaps forward and arches her back like a bronco over and over again), and landed kind of on my face but with the majority of my weight coming down on my left hand, thus straining my wrist and thumb when it bent back.

(And yes, if you’re wondering, I was wearing a helmet! It didn’t break, but I believe I’ve gotten a new one since then).

Thankfully James was there, so he caught Misty and checked her over while I cried, (which I believe was a better alternative to killing her). Then back in the saddle I went.

(Side note on this right-back-in-the-saddle thing. Have you ever took a minute to stop and think about that? How we equestrians will get back on a horse who has just pummeled the crap out of us? It really says something about us as a collective group, don’t you think? *What* exactly that is, I haven’t figured out yet.)

My wrist was killing me and for that reason, I only walked and trotted a few more minutes. I didn’t ask for the canter again as I knew I was in too much pain to try and save myself if she misbehaved again. We called it quits, I put her up, and then went home and cried some more in the shower.

(Another side note – EVERYTHING was ruled out for Misty’s bad behavior that day. She wasn’t in pain, the saddle fit fine, etc., etc. She was just being a you-know-what.)

So – my wrist – it’s aching today. And even though I don’t particularly relish feeling pain, it’s a little reminder that – I’m a rider. Similar to how an ice hockey player might become fond of the scar on his cheek because, he ‘was a hockey player,’ I think riders enjoy the little daily reminders of the thing that defines them most – horses. We’re tough as heck…we (try to be) fearless…we can be daring. Even though I (sometimes) like to get dressed up and go to a fancy party, I wouldn’t call myself prissy or girly. Equestrians are used to eating dirt, but we brush ourselves off, (I cuss and cry while doing this), and then get back on. Why? Because I’m a rider – my aching wrist tells me so.