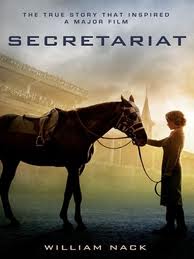 I never make it to the movie theater…I mean never. And I don’t hate the theater – it’s usually just a time/not knowing what’s out there issue. But when “Secretariat” was out, I made it on the second day!!! So that following Christmas, my sister thoughtfully gave me Secretariat, by William Nack.

This is a long book, like 455 pages long. And it doesn’t just start with the story of Secretariat…it starts way before he was even thought of. It kind of almost begins in 1862 and then works its way to the almost-present.

As you read this, it’s obvious that multiple worlds came together to create this perfect storm that was Secretariat, one of, if not the, greatest racehorse of all time. This novel rings so true to real life because Nack was on the inside looking out. “For eight months, for as the racing writer for Long Island, New York’s Newsday and then as the designated chronicler of the horse’s career, I had a daily front-row seat to watch Secretariat.” When I learned this at the end of the book in the Author’s Note, I had a complete a-ha moment; throughout the book I had wondered how on earth this author knew such minor details about this horse, his owner, trainer, and everyone else wrapped up in this prestigious world of Triple Crown winners.

The best part about this book is meeting Secretariat, or Red, face to face, essentially. Red raced to fame in 1973, 9 years before I was born, so it was nice to get to know this horse who made headlines before I was even thought of. He was funny and sassy and moody. When his training began, he was an excellent pupil, albeit a slightly slow learner. But once he found his stride, watch out! He was a “tremendous machine.”

I also enjoyed the author’s sheer love and devotion to this horse. It’s obvious, even though this is written in 3rd person, that Nack still holds Red in incredibly high esteem. In the Author’s Note, he admits this much as he recalls his record-breaking Belmont victory.

“Turcotte scrubbed on the colt, opening thirty lengths, finally thirty-one. The clock flashed crazily: 2:22…2:23. The place was one long, deafening roar. The colt seemed to dive for the finish, snipping it clean at 2:24. I bolted up the press box stairs with exultant shouts and there yielded a part of myself to that horse forever.”

And then finally, Nack remembers hearing the news of Secretariat’s death on October 4, 1989.

“The last time I remember really crying was on St. Valentine’s Day of 1982, when my wife called to tell me that my father had died. At the moment she called, I was in a purple room in Caesars Palace, in Las Vegas, waiting for an interview with the heavyweight champion, Larry Holmes. Now here I was, in a different hotel room in a different town, suddenly feeling like a very old and tired man of forty-eight, leaning with my back against a wall and sobbing for a long time with my face in my hands.”

When I read this part, I was sitting in the waiting room of a doctor’s office, and I struggled to maintain my composure. Nack had built the majority of his career around this horse, and while his devastation at his loss is heartbreaking and painful, it’s also quite beautiful. He has penned a perfect legacy for Red in this book. It, quite literally, is a stunning read.